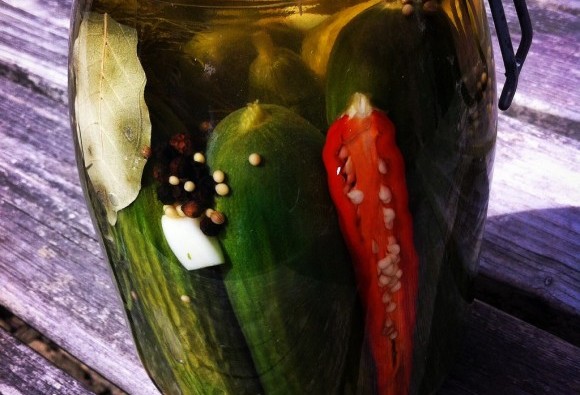 In essence, you can preserve almost any type of food (from vegetable to meat), Gherkins are probably the most renowned preserved vegetables in the world, and the variety in making them is astronomical.

Here is a traditional Balkan (Romanian) recipe for a spicy gherkin, if it’s too spicy – omit some of the garlic & spicy red pepper.

Insert the cucumbers in every jar (the preferable way is to put them vertically), make sure they are all pressed to each other – that’s the way to make them stand. Shove in between them the garlic, spicy pepper, dill, peppercorn, mustard & coriander seeds and bay leaves (you can use a metal skewer – not wooden one!).

In a sauce pan, bring the water to boiling temperature and turn off the heat, scoop in the salt and mix until dissolved, add the vinegar and pour the hot water with the spices in every jar (if you don’t have enough water, just boil the right amount with a salt/water ratio of 1 tsp salt to 1 cup of boiling water - and add it to the jars). Make sure they are covering the cucumbers (those who aren’t covered, will rot and ruin the entire jar).

Sometimes, the cucumbers will float and get exposed out of the water, there are many techniques to avoid this, a simple one is to place several grape-leaves above the cucumbers, they will push the cucumbers down under the water. Another one is to tilt the entire jar on its head (creates a vacuum) for the entire duration of pickling (it’s ok if some of the cucumbers are exposed in the “new bottom”).

Lock firmly and place in a sunny spot for 3-4 days or until the water becomes khaki colored. Put it on some plate (not metal or wood, ideally – ceramic) so any salt-water that might spill, won’t leave a mark. After that time, the gherkins are ready. Try one of them (using clean fork/knife) and store them in the fridge or cold pantry. The gherkins are good for up to 6 months.