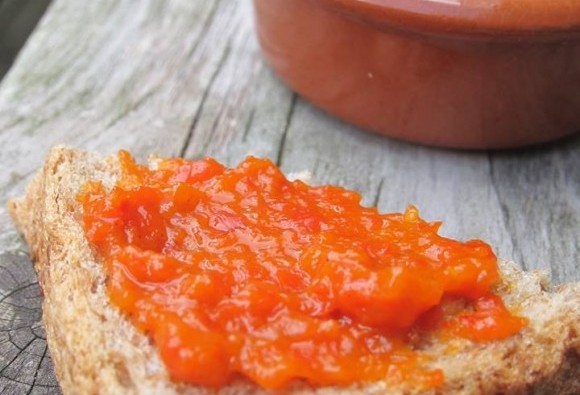 The Dutch have Mayonnaise, the North-American have Peanut Butter, Middle-East has Hummus and in the Balkan they have Lutenitza – sweet-spicy paprika spread.

Though the origin of the paprika (capsicum) is from South-America, this spread has as strong connection to people from Bulgaria, Macedonia & Serbia, as Hummus has with people from the Middle-East.

It comes in varied recipes (every household has its own ‘original’ recipe), textures and tastes (from honey-sweet to spicy-as-hell) and can be applied on meat, fish or simply as a spread on a bread. Here is my recipe for this lovely dip:

The original Lutenitza contained no carrots and/or eggplant, but these additions were added over the years and contribute much flavor in my opinion.

First we will prepare the peppers, we do this by roasting them (over an open flame or grilled in an oven at 200C for 50-60 minutes or until blackened), put in a bag, cool down, take off the skin, seeds and white parts (DO NOT RINSE WITH WATER – it will take away all the smoky scent that this method is trying to achieve). Afterwards you can roast the eggplants (flame or oven, like peppers), cool them down, spooned out the contents into a small bowl, chopped and set aside.

Take the peppers, eggplants, carrots, garlic and tomatoes and mince in a food processor until the mixture reaches a smooth & uniform texture. At this stage, anyone interested in a spicy Lutenitza, needs to slice open the hot peppers, remove seeds (unless you really like spicy) and mince with the other ingredients.

Transfer mixture to a wide skillet (preferably iron-cast pot with enamel coating), add the olive oil, vinegar, sugar, salt, pepper (and any other spices you might want), bring to a boil while stirring, lower the heat to the lowest level while leaving it half covered and stir it occasionally until you can scrap the bottom of the pot without plenty of fluids, takes about 1-2 hours. Cool the mixture, taste and correct the seasoning.

For immediate use (up to 2 weeks) - Just put the mixture into sealed & sterilized vessels and keep in the fridge. Use clean cutlery while spooning it out (this recipe doesn’t contain artificial preservatives).

Long term use (3-4 months) - This is done by inserting the mixture in sterilized glass containers immediately at the end of cooking, leave about 2 cm space between the lid and the top of the mix, close with a metal cap, turn them over so they will stand on their head (creates a vacuum that preserves the mixture), put a sticker with date of preparation + what it is and put on a shelf in a cool and dark place (as long as you do not open the jar, it can be kept for some time).