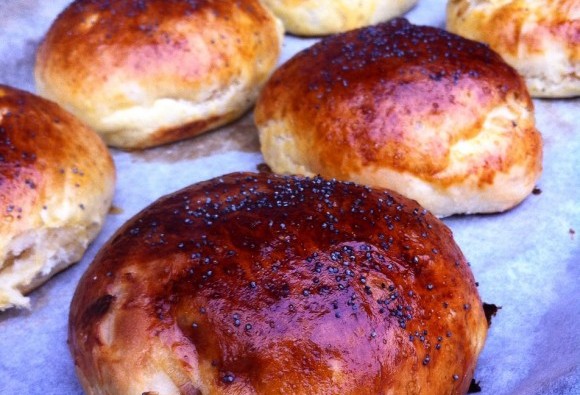 Potatoes had a huge impact on European cuisine, to a level where they started replacing some of the flour that was used to make dough for many baked goods. With that, a whole new culinary revolution began in the region, one that will keep on having effect till this day (e.g. the Italian Gnocchi used to be made from Semolina but once the potato was introduced in Italy, it quickly replaced the wheat as the main ingredient).

Here we will show how to make a Lithuanian delicacy called Bondes - tasty buns made from flour and mashed potato, filled with fried onions and mushrooms (wonderful Autumn dish with fresh mushrooms).

Storing: Can keep up to 1 week sealed from air

We start with the potato puree, fill a cooking pan with water, bring them to boil, add the potatoes and simmer them for 30 minutes or until soft, drain the water (save 110 ml - 0.5 cup - of cooking water and cool it off), bring the potatoes back to the pan, keep on cooking for 4-5 minutes while stirring constantly on a low heat (you are drying the potatoes from water), add the butter and milk - mash until smooth texture is achieved (make sure there are no small, hard pieces). Cool off on the side.

Combine in a mixing bowl the potato puree, cooking water, egg, salt, pepper and sour cream, stir well until uniform. In a different bowl, mix flour, yeast, sugar and salt. Add the potato bowl into the flour bowl, knead well for 10 minutes, if the mixture is too wet - add flour until it is easy to work with. Proof in a covered bowl for 45 minutes or until double in size. Punch the air from the dough, quickly knead and put back to proof for an additional 30 minutes or until double in size.

Turn on the oven to 180C, take out the dough, divide it to 100 gram balls (around 10-15), roll each one on a floured surface, place on a baking form, lined with baking paper (have at least 5 cm gap between each ball, they rise quickly) - it might require 2 baking forms. At this point (when all the balls are on the baking forms), take the first ball, slice it horizontally almost all the way to the end, flip it open, pour 1-2 tsp of filling, close the cover back on, tight the ball around and place back on the baking form (might need a bit of flouring on the bottom, so it won’t stick). Brush the balls with the egg yolks and leave to proof for 15 minutes (no need to cover).

Coat the balls with poppy seeds and insert into the oven (if you have 2 baking forms, place the second one in a cool place, like a fridge) for 15-20 minutes or until golden brown. Take one of the balls, slice it open to see if it is ready. Cool off for 3-4 hours and close in an airtight container.

They are brilliant for a breakfast/noon snack, side-dish at dinner or just as an appetizers. Of course, this is a basic recipe, you can add favorite herbs and spices, either to the dough itself or to the filling (as well as use different types of fillings).

Wishing everyone a cozy Autumn with lots of tastes and stories around the table.