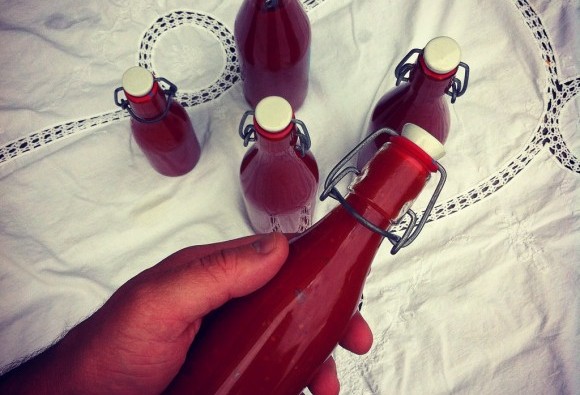 Oddly enough, the first Ketchup didn’t contain any tomatoes. The main reason is that it originated in China from around 300BC (closest tomato was to be found in South & Central America). The sauce was called ‘Ge-Tchup’ and it was made from soy, fermented fish and sea-shells.

British sailors who came to the Far-East in the early 18th century, brought back the ‘Ge-Tchup’ to Europe. Since soy didn’t grow abundantly in the North-European climate, people were looking for substitutes. After much ‘trial & error’ the tomato was chosen as the main ingredient.

The Chinese “Ge-Tchup” came to Indonesia & the Philippines, where it was pronounced ‘Ketjap’, where the Dutch VOC merchants found and brought it back to the Netherlands - where up until today you can purchase it next to its ‘relative’ the Ketchup. Make your own ketchup with this recipe:

First of all, we are going to roast the bell peppers - turn on the oven to 200C, place the bell peppers on a baking form (layered with aluminum foil) at the highest level of the oven, for 45-60 minutes. Check every 15 minutes and turn them when the top side is charred, when the peppers are all charred and soft, take them out and put them in a container (sealed with a plastic cover/bag) to cool off. It will be easier to take off the skins afterwards.

Skin the roasted peppers, deseed & cube them. Heat up a big cooking pot, pour the oil and add the peppers, tomatoes, onions and garlic, bring to a boil, cover and lower the heat to minimum - simmer it for one hour. Check from time to time if it’s not too dry (add a bit of water in case it is).

After one hour, use a hand-held blander, mince everything inside (it should be as uniform as possible, it’s ok to see the tomato seeds), add the oregano, thyme, coriander, smoked paprika powder, lemon-salt and cayenne pepper. Put back one the fire and simmer for another hour. After an hour add the lemon juice and honey, simmer for another 15-20 minutes or until it’s thickened enough, add salt & black pepper for taste and turn off the heat.

Pour the mixture into a sterile, air-tight glass containers (not plastic or metal), turn up side down on the opening (creates a vacuum to seal from air) and keep in a cool and dark place.

For immediate use, I suggest to cool it off for an overnight (8-10 hours), then cool it in the fridge for another 1-2 hours (the low temperature makes the texture thicker and the flavor stronger). In general it can be kept sealed for 6-12 months (depends how hot the climate is), after opening - keep it in the fridge and use it for no more than 2 weeks.