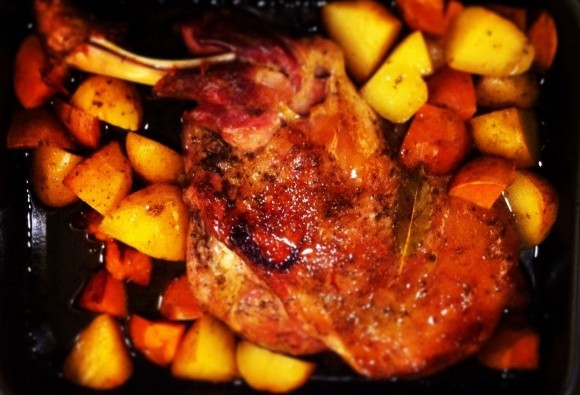 What happens when Greek bandits are trying to avoid Ottoman soldiers ? the Kleftiko is born.

It was in my last trip to Greece, on the island of Paros in the Cyclades, there is a nice little town called Naousa. Me and my family have traveled there daily. It is a beautiful place, whitewashed walls, with bluish colored window frames and doors, a good luck/against the evil eye charms are hanged everywhere.

One day, while I was traveling alone, I saw a small courtyard with an old Greek man sitting next to what looked like a sealed Tabun oven, So I went over to him and tried (not with great success) to communicate by using a ridiculous sign language. It was a mutually funny effort, in the end I was successful in asking him what he makes? And he told me “Kleftiko!”.

Fortunately, at that point, the old man’s son came to our aid, using broken English, he began to tell me about the mysterious Kleftiko.

And just like that, without a lot of commotion, began my acquaintance with an extremely basic and delicious dish (and it came with a bonus - an interesting story on how it came into this world).

To do this, we should go back a bit…

The date is the 29th of May 1453 (Tuesday for those who really want to know), the place is Constantinople (modern-day Istanbul) and the event - the Ottoman Empire conquers the heart of the Byzantine empire - and with it, a 1500 years of the Roman Empire are coming to an end.

This event was the trigger to many important turning-points in our history, some credit it with the end of the Middle Ages and the beginning of Early Modern period & Renaissance, others add the discovery of the New World to it.

But among all these amazing milestones, one group of people has been quite forgotten - the Greek Klephts.

This is a special group of Greeks, who after the conquest of Constantinople have decided to stay in the mountain area (where the Ottoman army was not so successful in fighting them), become bandits (kleftis in Greek = “bandit, thief” - it comes from the same root for the word kleptomania) and harassed the Ottomans while using a guerrilla warfare until the 19th century.

While the Klephts did not give up and kept on fighting the Ottoman rule, they could not sustain their own agriculture and instead were relying on the loot they stole/robed. However, in many cases, Ottoman patrols continued to pursue them for many days, which in itself made the Klephts develop an ‘underground’ (double meaning) cooking methods that won’t reveal their position.

This ‘underground cuisine’ created some original and delicious recipes, here we will witness one of the highlights of this cuisine - the Kleftiko.

The technique is very similar to the Hāngi from New Zealand or the Rúgbrauð from Iceland. In order to avoid detection by the Ottomans, the Klephts dug a deep hole in the ground, made a small fire in it, took a lamb shoulder - seasoned with spices and root vegetables - put all the ingredients in a sealed clay pot, put it in the pit and buried it under the earth.

The residual heat continued to cook the dish for hours. During this time, the Klephts continued to avoid the Ottomans, and finally returned to where they buried their food, removed the earth and set up a table.

Click here to make your own Kleftiko (Without digging a hole in the ground).