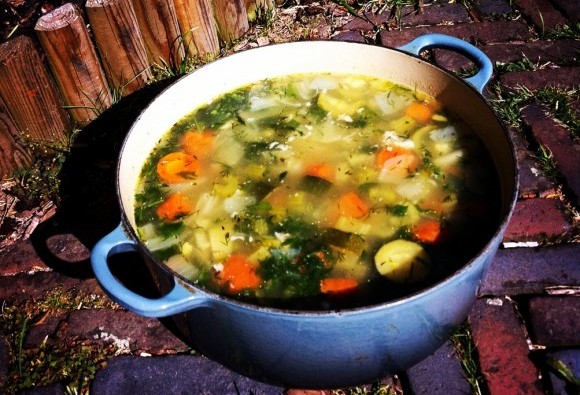 It is that old feeling of Winter, days are becoming shorter & colder, and while today you can just go to the local drug store and get a supply of pro-active/vitamin-plus/killer-of-all-known-cold medicines.

Once upon a time, it wasn’t so simple, actually up until 100 years ago, our food held - in most part - our best chance of overcoming most of the common diseases.

Among Ashkenazi (East-European) Jews, the Traditional Chicken soup has, is and will always be nicknamed ‘The Jewish Penicillin’ or ‘Jewish Wonder Medicine’ for its ability to not only bombard the ‘patient’ with huge amount of nutritional elements in a single dish, but also (and mainly, I would add) to actually revive a person with each and every heaped spoon.

They say that the amount of recipes for this soup is equal to the amount of Jewish households in the area of East-Europe (multiplied by 2 for the sake of arguments between family members).

Some balabustot would fight to the death in order to keep all the herbs in the soup till the moment of consumption (what I term as the ‘Rain Forest’ version), others would filter every little parsley leaf until all that is left is a clear, fragrant,warm, golden soup (what people term as the ‘Pure’ version).

Of course the 3rd, 4th and 5th groups will argue about the angle in which you should slide the chicken wings into the soup, and so on and so on…

In any case, the ability of this amazing dish to resurrect ill people (or just ones who fake it in order to eat it) is unquestionable.

Want to try it yourself ? Click here for a great recipe.